I've heard all kinds of comments about the restaurant Blu Rovinj: from favorable comments praising Blu's food to calling it a pretentious place with mediocre food. But there is one thing about the restaurant Blue that everybody agrees about – Blu has the best location in Rovinj. We are talking seafront here, and not just any seafront, you can literary eat here with your feet dipped in the Adriatic Sea.

Blu is located in a residential part of Rovinj, some 3 km west from the old town, not far from Amarin Resort.

The restaurant is right at the seafront, with plenty of parking spaces available in a shade of a thick pine forest surrounding the restaurant. Lots of locals and tourists come to this area to swim and sunbathe.

On approach you immediately notice a nice seafront terrace with round tables, white tablecloths, and a white canopy protecting it from the sun. The restaurant is located just a few steps away.

Architecturally, Blu is an interesting place. It actually doesn't have indoor seating in a classical way, with a fixed roof, four walls, doors, and windows.

Blu's interior is actually a courtyard terrace, with high walls that give a certain structure to the place, and a canopy stretched roof. Sea facing front has large floor to ceiling windows, and unobstructed view over the sea, and even a tip of Rovinj's old town. 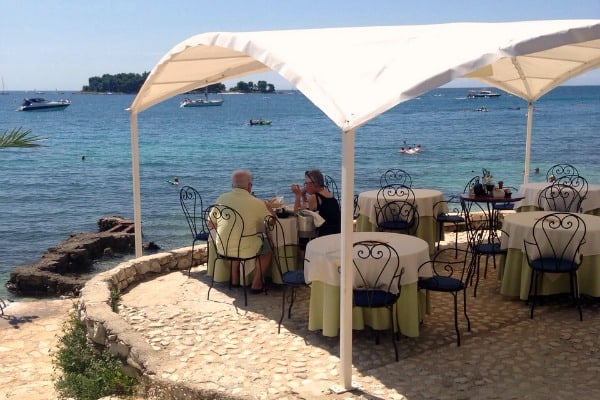 Blu is an upscale restaurant, and I would say an incorrigible romantic place due to its nice setting barely a few steps away from the sea. That's said, the restaurant is also on an expensive side.

Our experience at the restaurant Blu Rovinj

We visited the restaurant Blu back in August at 1 pm when the sun was spicy, and the heat was simply too much to take. Even the nice sea breeze couldn't cool us off from the August heat. To be completely fair, eating anywhere else in Rovinj in these conditions, would be even worse. At Blu one at least gets that perfect sea breeze. 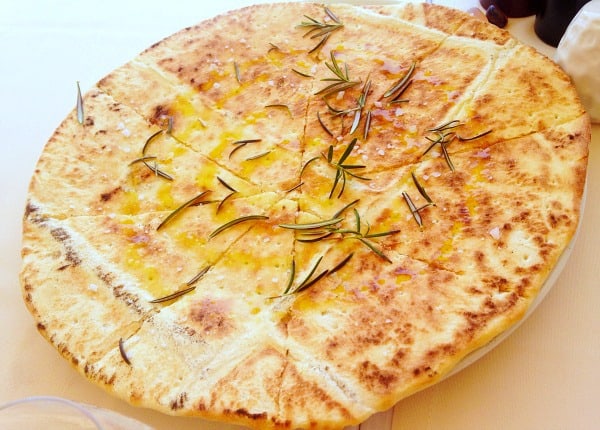 The restaurant wasn't busy at that time, and we got a wonderful seafront table, right next to the large window, with a beautiful view of the sea. The table is set flush with the window, meaning that you get to use only three sides of the table. At first it seemed a bit bizarre to eat next to each other rather than facing each other, but with that view, you quickly forget your table manners.

At Blu, they have a cover charge, which can be a bit annoying (to me at least). But for the cover charge they do bring you rosemary focaccia. I liked their focaccia a lot and didn't eat bread at all, although we were also served a basket of freshly baked rolls. 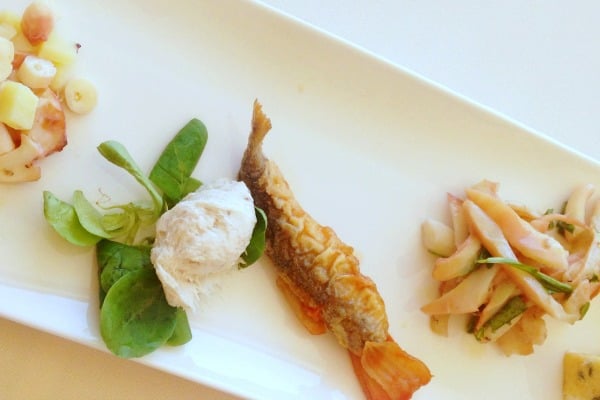 For starter we ordered a choice of seafood appetizers. We haven't ordered full portions, but among the three of us, we've ordered a portion and a half, that we shared.

The staff was nice enough to split each dish we've ordered in three. We tasted five different appetizers, and they were all beautifully presented on a long white plate. Our appetizers included: octopus salad, cod spread, sardine in savor, squid salad, and salmon and cheese roll.

I wasn't really impressed with our starters. I mean there was nothing wrong with them, but they were rather forgettable. I don't know why Croatian chefs keep insisting on salmon, that you can't find in Croatian waters, and it's inevitably imported.

Anyways, another annoying thing is that cod spread. There are two companies in Istria that make a cod spread, and you can say right away that it's industrial, that it contains lots of margarine, and that it's a simply poor thing to serve on a plate in an upscale restaurant. 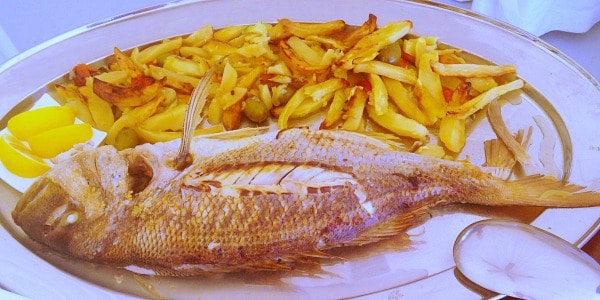 We did however loved our main course. The waiter suggested ordering a fresh dentex fish baked in the oven with potatoes and other veggies. It sounded a bit unexciting, maybe too classical, but the thought of a fresh Adriatic dentex was enticing, and we went with his suggestion.

Here in Croatia, when it comes to ordering fresh fish (and especially with wild-caught fish) a waiter usually brings over a tray of available fish, and let you choose a fish, or just to show you how fresh it is. Fish is prepared whole, and the waiter will always offer to clean it for you at the table. At Blu was no different, and we did let the waiter remove the head and bones for us, as he simply was able to accomplish this job faster. Fish was grilled in an oven with potatoes. And it was yummy!

We've skipped dessert this time, so I can't really comment on it.

Final verdict: While the food at Blu was good, it didn't really blow us away. However, the location is top-notch and that alone should be a reason to stop at Blu if you are in Rovinj. I would recommend you rather go there for dinner than lunch, especially during July and August, as it gets too hot to eat. Prices are on a higher-end, but not exaggerated. All in all, a nice place for a romantic dinner out in Rovinj.

If you plan to visit Rovinj, start with our Rovinj Travel Guide. We also wrote a detailed post on the best things to do in Rovinj, as well as a post about the best restaurants to eat in Rovinj. For inspiration, you can check our Rovinj Photo Walk, and info about the best events in the town, you can find here. We also feature lots of Rovinj restaurant reviews here at our blog. Our favorite restaurants in Rovinj are Barba Danilo, Giannino, Jure, and Maestral. We also like the vibe at Kantionon, and the food is good too. For a fine dining experience, choose Monte in the old town, or Wine Vault in hotel Monte Mulini. Male Madlene is a small quirky place we also recommend. Have a candlelit dinner at the restaurant La Serra on the island of St. Andrew. We've also covered bars and clubs in Rovinj.

What kind of restaurant do you usually look for? Do you value location over the food? What do you think about the restaurant Blu Rovinj? Let us know in the comments below.

Frankaboutcroatia.com is a participant in the Amazon Services LLC Associates Program, an affiliate advertising program designed to provide a means for sites to earn advertising fees by advertising and linking to Amazon.com and affiliated sites. This post might also contain affiliate links to other sites, like accommodation or activities. And if you purchase anything using these links, we earn a little commission with no extra costs for you. Thank you for supporting our blog! Read full disclaimer here.

Some information on this site isn't maybe completely accurate at the moment, due to the changed circumstances caused by coronavirus pandemic. However, we will keep the information as it is, and updated for the time when the travel to Croatia returns to normal. For the latest news how coronavirus influences travel in Croatia, and what measurements we are taking, check our Visiting Croatia in times of Covid-19 post.

Renting a Car in Croatia?